is Chris Hilberg. Hilberg has said nothing throughout the process in opposition to imposing the Admissions Tax in spite of his membership at the KCC., in fact no Council member has brought up the possibility that the tax may be unfair or that the KCC membership is already contributing substantially and financially to our community, beginning with the $403,984,43 annual real-Estate payment. Much more discussion is needed before imposing this tax on every member of Kenwood Country Club.

City Council passed Ordinance number 18-07 at this nights City Council meeting by a vote of 6 to 0. Councilman Chris Hilberg did not participate in the discussion or the vote because of his KCC membership. The 3% tax can be increased up to 8% by  city council.

It began in the July 23rd Budget and Finance committee meeting ,at 6:30 PM just prior to the City Council meeting. Committee members Spencer, Gehring and Mueller met with city manager Moeller. There agenda included discussing the proposed 3% Admissions Tax, a tax that would be imposed on every Kenwood Country Club member. Moeller had met with representatives from the KCC previously (click on green button above) and conveyed their concerns during the committee meeting. Moeller also provided his interim report to the three council committee members, posted above on the green button.

The committee members agreed to recommend that the tax should  not include the initiation fee paid by new KCC members. The  KCC representatives meeting with Moeller asked that the initiation fee not be taxed because the fee is used for KCC capital improvements and that the club has 8 or 9 million dollars in debt. Committee member  Spencer said that the meeting with KCC  represented a "great example of cooperation between private business and city administrators, and that the city will only go after the funds needed".

Justification for imposing the 3% tax included the council opinion that the Golf Course is "undervalued"  in respect to real-estate revenue received and services provided by the city to support the golf course property. The law director was instructed to finalize the text in the ordinance and that the "golf course" is subject to the 3% tax on KCC members, and not the "club". Apparently Madeira city council members  have committed to approving an increase coming next year from  the Madeira-Indian Hill Fire Company expected to be $184,000.00, using the $188,000.00 KCC proceeds from the new  "admissions tax" imposed on members of the KCC. Council members were grateful that the club had opened up their books showing that the city would exceed their estimated  revenue expectations of only $170,000.00. Mayor Theis acknowledged her gratitude for the KCC good faith.

The KCC representatives, in their meeting with Moeller had asked that city council follow thru on a earlier commitment of imposing the KCC member tax only if Madeira voters approve an increase in the Madeira earnings tax, to be decided this November. In spite of this request from KCC representatives, city council  decided that the tax should not be delayed, stating that "a bird in hand"  had to be considered, expressing concern that the outcome of the November vote increasing the earnings tax is not certain, but that the KCC tax is a certainty. There was some discussion that if the November vote is not favorable for the city, revisiting the KCC tax rate on members might be in order. Madeira can raise the 3% tax up to 8%. Council members continued expressing their pleasure that the club is a partner with the city, for opening their books, and for accepting the imposition of the 3% member tax. Ordinance Number 18-07 imposing the 3% tax is posted above on the ​Blue Button.​​

At this weeks Planning Commission meeting the long expected Comprehensive Plan Draft was distributed with nearly no discussion, in spite of both Envision Group principles Emil Liszniansky and Ryan Smalley standing at the podium. prepared for questions. This is the nearly finished project that began early in 2018 at a cost of at least $100,000. This report consist of 68 pages and is posted on two red buttons to your right. 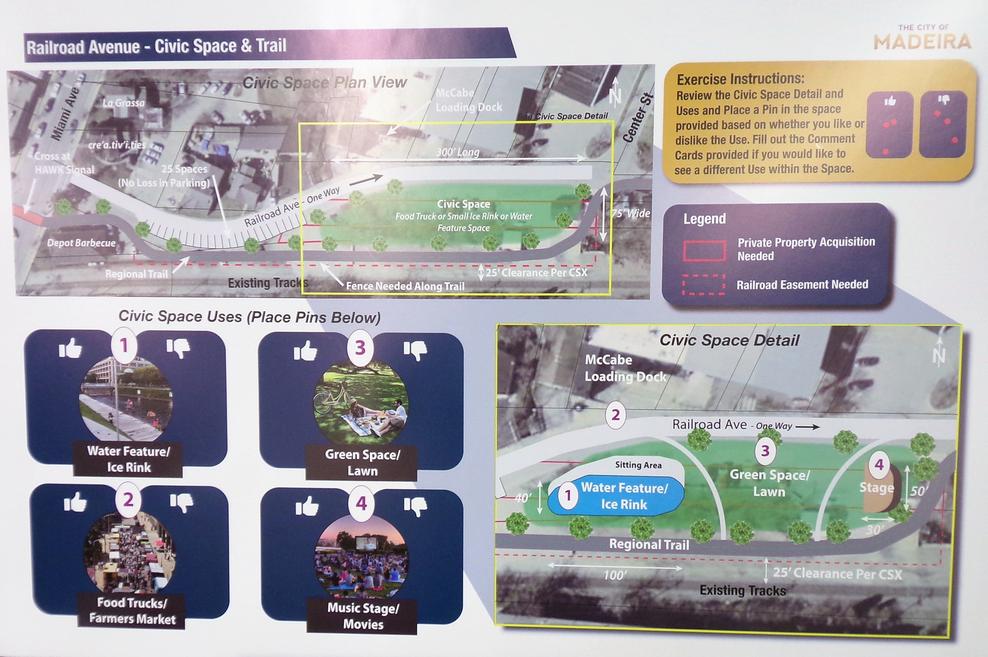 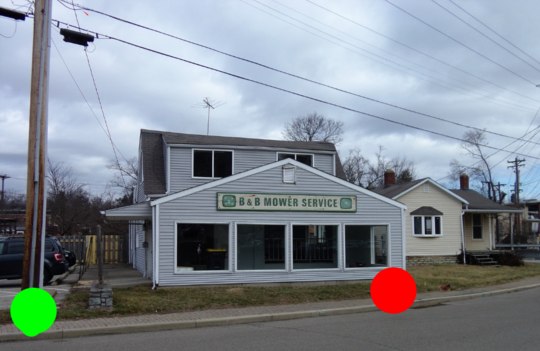 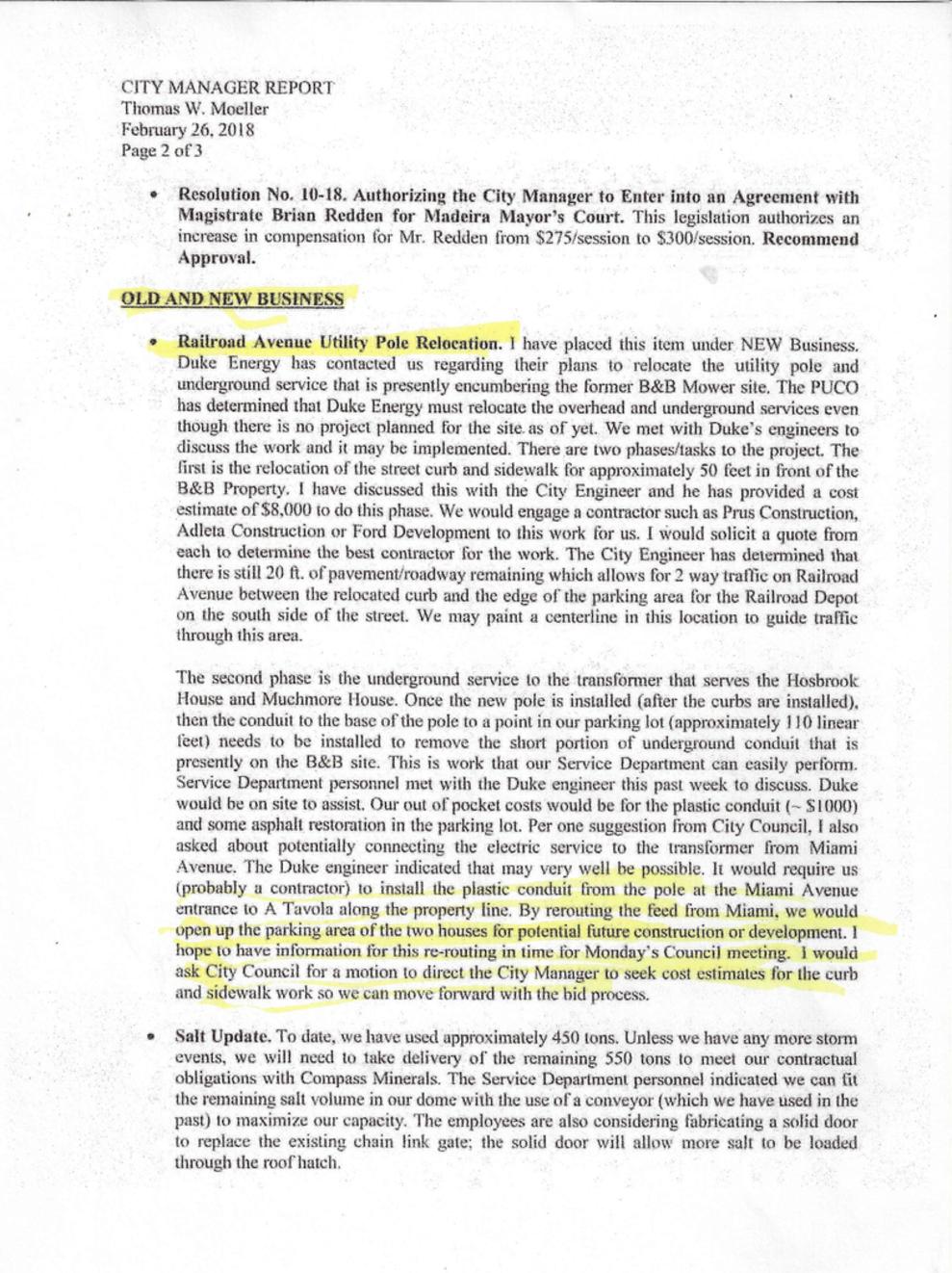 ​   Madeira City Manager, Thomas Moeller woke up on the morning of Tuesday April 14, 2017 facing a dilemma, Moeller did not have the Madeira City Council Clerk available to sign an extremely important Ordinance, number 17-06. Every Ordinance and Resolution passed by Madeira City Council must be signed and certified by the council clerk to be valid. Moeller was desperate, the Certified Ordinance had to be at the Hamilton County Board of Elections that day, April 14, 2017, or the Madeira May 2nd "Special Election" would be cancelled............

​​Madeira City Tax Commissioner  & Assistant Treasurer Christy Lowndes, in sworn testimony on April 27, 2017 stated, "I was appointed as the acting clerk (City Council Clerk) Tuesday morning March 14th 2017" She was asked who appointed her as the acting clerk, her answer was " The City Manager ( Thomas Moeller)"  She was then asked what authority does Mr. Moeller have to appoint an acting clerk? Christy answered " He is the City Manager" Madeira City Manager Thomas Moeller in his sworn testimony was asked "Ms. Lowndes testified, Is it correct that you appointed her as acting clerk of Council?"  Moeller answered " No, I did not appoint her as acting clerk of council"  Moeller was then asked "Who did appoint her?" Moeller then answered "Well, the city council approved legislation which designates the assistant treasurer / tax commissioner as the acting clerk inthe absence of the Clerk of Council"  ​​Perjury or just very intentional misleading testimony, Perjury.  City Manager Moeller  immediately delivered the signed copy of ordinance 17-06 to the Hamilton County Board of Elections in effect perpetuating the Madeira City fraud, knowing that the copy of ordinance 17-06 had just been "Falsified" at his (Moellers) direction, a moment of desperation. You can review the full transcripts of Moeller's and Lowndes sworn testimony, go to page 11.  Lies, & fraud, covered up by Mayor Adrien, Law Director Brian Fox, Vice Mayor Theis, council members Gehring, Steur, Hilberg, Ashmore, and Spencer, or were they complicit.Why is Moeller still employed as the City Manager of Madeira? The results of the May 2, 2017 election will be decided by either the Hamilton County Appeals Court or the Highest court in our state. The lawsuit is about the "Soul of our Town".

" In July my colleagues and I voted unanimously to place a tax increase proposal on this November's ballot. If the proposal is approved by voters, then the city's earnings tax will increase to 1.25%, (from 1.00%) and the resident earnings tax credit will change to 1.05% (from 0.90% an increase of 0.20%) . Additionally, in July council nearly unanimously passed a 3% admissions tax on membership dues to golf clubs (KCC) ."  Council member Chris Hilberg a member of Kenwood Country Club did not participate in any discussion and  nor did he cast a vote.

"Combined these changes will generate approximately $1.2 million in annual new revenue to the city. The city currently collects approximately $7.5 Million depending on the year. Recommending that my neighbors and I increase our tax's is not a cavalier decision. Indeed, the city of Madeira has a decades long, good tradition of low tax rates, in general the lowest 20% in the county. However, I believe a priority change is needed at the city level because for too long the city has lived from paycheck to paycheck with no long term savings and by passing on the cost of infrastructure projects to future generations (we are still paying off Kenwood Road construction through 2020). The city should have a better fiscally managed house. The city should afford to install sidewalks when we reconstruct a street, for example".

"Council first researched the need before determining the proposed rate increase. If passed, the new $1.2 million revenue will fund:

You can read Councilman Muellers entire posting on his  FB site "Madeira City Council Member Brian Mueller"  madeiramessenger.com will work from Mr. Muellers posting in explaining many other Madeira tax and spending decisions made during the past three years.

Comprehensive Plan Forum number four was held on November 27th at Madeira High School. Prior to Forum number four the Envision Group was suggesting that our city should create 'The Madeira Community Improvement Corporation which would facilitate the acquisition, assemblage, and holding of multiple Real Estate parcels for future development". The Envisions Group has now lost most if not all credibility. These two suggestions are proof that the November earnings tax defeat was "justifiable". The huge earnings tax increase had many purposes, road repairs was only a small part. Indeed we now know that our city council members were discussing their plans for acquisition of Councilman Hilbergs Railroad Avenue property, for an "Ice Rink", a secret well kept until this week., after the earning tax defeat. City Council was expecting a different November outcome.

Click blue button above and scroll to Parks and Recreation Committee Report.

Ordinance Number 18-07 An Ordinance Imposing
a 3% Tax On all Members of The Kenwood Country
Club, Generating an Estimating $188,000.00 Annually
Madeira City Council blows away reputation as fiscal conservatives by
either imposing new tax's or by launching marketing efforts
encouraging electors to self impose new tax's. Click on to this button
to view June 11, 2018 Council Agenda, Managers Report,  committee
Reports, Ordinances and Resolutions. This site does not dispute
the need for some specific increase in tax revenue but will not
support irresponsible increases in tax revenue
allowing for irresponsible spending.

Madeira City Council is imposing a 3% tax on every Kenwood Country Club Member and asking Madeira voters to increase the Madeira Earnings tax rate, see details posted on blue button, (click on). This is a free for all, at City Hall, every conceivable way of imposing higher tax's is under consideration. This writer doesn't dispute the need for some increased revenue and the need to address specific needs in our community, but that's not what this is about. This is about creating a substantial war chest, of  1.2  Mllion, allowing for the possibility of irresponsible spending in our community. Our City Council members don't get it, "its not Their Money". Until now Madeira was known for fiscal responsibility, not sure today.

At the June 1st Budget and Finance Committee meeting Councilman Gehring made note that two of the three committee members are Democrats but that as a Republican, he also is supportive of both the 3 % Admissions tax imposed on every member of the Kenwood Country Club and the Earnings Tax Increase. In this instance there was no difference, all three committee members were in lock step. It looks a lot like a decision that would be reached in Washington DC, never before in Madeira. Does the word Socialism ring a bell. Kenwood Country Club members, many of whom reside in Madeira are, without any representation. City Council members  at the June 11th City Council meeting stated that the Ordinance imposing the "Admissions Tax" would be in effect only if Madeira residents approve an increase in the current income tax rate. But in the same breath council passed a first reading of Ordinance number 18-07, imposing the Admissions Tax. The only KCC member serving on council