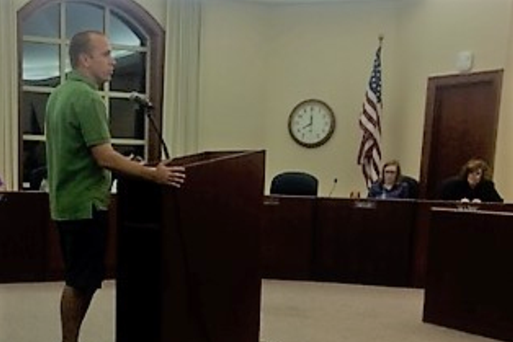 ​          ​More than a dozen residents of Madeira Pines, all members of Madeira Pines Homeowners Association were in attendance at last night's city council meeting. ​ Association President Matt Shafer was the spokesperson representing the association. Matt started his address by stating the concern the residents have following the recent  crimes committed at the neighboring four family properties located on Shawnee Run Road, owned by Cincinnati Metropolitan Housing Authority.

​       Matts concern specifically is for the safety of the families living on Madeira Pines. Matt discussed various solutions that potentially might increase the safety of the residents. He suggested that a fence could be erected on the top of a retaining wall separating Madeira Pines from the Shawnee Run properties, or the installation of surveillance Cameras. He was especially concerned that homes on the East side of Madeira Pines are facing the back of the CMHA properties. City Manager Moeller addressed the suggestion of a fence installed on top of the retaining wall, stating that a fence would meet Madeira  zoning requirements only if a walkway is provided. It was suggested that CMHA might provide some suggested security due to their concern for the community. Moeller went on discussing additional street lighting, and that he would discuss that possibility with Duke Energy.

​      Matt asked about the city's access to information regarding the residents living in the properties. That information would be limited to public records. Mayor Adrien stated that normally it is frustrating working with CMHA, but that she was surprised that in the two recent instances the cooperation was different including the eviction of the resident in Apartment number two in just less than a few days. Adrien and Matt discussed the upcoming appointment with representatives of the CMHA, Matt disclosed that soon to be council member and Madeira Pines resident Matt Luther was the resident designated to meet with CMHA, discussing the Shawnee Run properties. Adrien went on to say that the city would do whatever was possible assisting the residents of Madeira Pines. Moeller added that he wasn't too sure how quickly Duke Energy might respond to the lighting issue, but he would shoot off an email the next morning.

​      Next were comments from Law Director Fox stating that the neighborhood would lack standing in bringing any legal action, lacking legal leverage. Our police chief assured residents that there would be police patrolling , including on foot. The chief suggested that any questionable activities in the neighborhood be called in and suggested a neighborhood watch program be initiated. The chief also said that the call record at the Shawnee Run properties during the past eighteen months have not been out of the ordinary, loud noise, chatter in the backyard, no drugs, fighting, no physical altercations etc. A comparison was made to the homes and call instances on Madeira Pines versus the number of residents living in the CMHA properties on Shawnee Run Road and call instances at those properties. There was a discussion relating to privacy issues, including trespassing onto the CMHA property.​

​CMHA Is Responsible For Security......

​       ​The messenger dispatched a reporter and photographer to Madeira Pines and the Shawnee Run Road  /  CMHA properties. The photos posted above on this page may help explain the problem and may help in developing solutions. (click on to pictures to enlarge)

​      ​Lifelong Madeira resident agrees that security at the CMHA properties located on Shawnee Run Road, the scene of recent criminal activities, is the responsibility of Metro Housing Authority. This extremely reliable source went on to say that with the exception of the recent activities, the Housing Authority has for the past seventeen years been very responsible, and they insist that tenants contribute to the community. The source has come to know many of the tenants and does not speak badly of any tenant that he has known. The source does not dispute the recent criminal activities but credits CMHA for the timely eviction of the tenant from Apartment number 2. The source agrees with our police chief, that past history at the Shawnee Run apartments, with the exception of recent activities is not different in comparison to what would might happen on any typical residential Madeira street.

​Messenger Note, If any further criminal activities were expected, it would be recommended that CMHA install surveillance cameras  in back of Apartment Buildings. Neighborhood watch by Madeira Pines residents was also a good suggestion.